One of the driving forces behind the 150th anniversary celebrations, at least from the workingman’s point-of-view, and definitely from a musical perspective, was retired NSW rail worker BRIAN DUNNETT. It was Brian who spurred me on to form a group (The Rattling Navvies) to perform during the celebrations. He also introduced me to the RTBU who, along with Darryl Hull at TALC, provided a grant to allow me research time including the preparation of this rail site. I recommend anyone interested in Australian rail heritage to visit the Trains of Treasure website. Brian, in his own extensive research, located the following ‘description’ of the railway wildlife one is likely to encounter.

Here is the leaflet used to promote a series of concerts staged in Sydney to celebrate the 150th anniversary of rail – and the role of the men and women who made it happen.


CELEBRATING THE 150TH ANNIVERSARY OF RAIL IN NSW 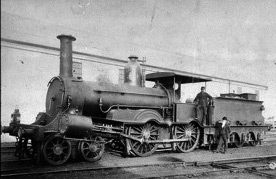 From smoking steam locomotives to silver bullet trains the railway has played a vital role in the transport history of our country. It moved sheep, wool, cattle, coal, depression workers, soldiers, commuters, and it moved our hearts with song, poems, yarns and memories.

Folklorist, Warren Fahey and his Rattling Navvies – Margaret Walters, John Warner, Marcus Holden & Gary Steel invite you to travel on The Iron Road in a series of lunchtime concerts featuring the songs, photographic history, stories and humour of our railways past and present. Songs and stories that bring rail heritage to life!

I WOULD LIKE TO EXPRESS MY SINCERE APPRECIATION TO THE RTBU, TALC, CITY OF SYDNEY AND MUSIC BOARD OF THE AUSTRALIA COUNCIL FOR THE ARTS (The Federal Government’s Arts Funding Body),WHO HAVE SUPPORTED MY RECENT COLLECTING WORK – ESPECIALLY IN REGARD TO THE FOLKLORE OF SYDNEY PROJECT